Yet Another Scam? DoulCi Activator: Facts and Alternatives

“If we shut-down, others will be free and only on the web, they will lie to you without any reason, just because they want to stole your money or do something else bad.”

If you forget the credentials of your Apple ID, the activation lock may lock you out of your device. Fortunately, there are some tools, software, and services that can unlock your device and help you get rid of the activation lock. You will find many software and services, and one of the services is DoulCi Activator. Today, we are going to explore everything about it. What it is, whether it is legit, how it works, and we will also suggest the best DoulC iActivator alternatives. So let’s start the discussion without further delay.

Before we dive into DoulCiActivator, let’s see what DoulCi is. DoulCi is a famous team of computer security experts who had made a reliable server that could bypass the iCloud activation lock, and it was a successful server that helped many people for free.

Yes, it was free.

DoulCi was created for the sole purpose of providing new hope to people who have forgotten their credentials. The server was able to bypass the lock, but you could only use the device for digital use and getting back your saved emails, contact, notes, etc.

After bypassing, the device could not use the cellular network and all the features that it had before. This was done due to the security reasons because no one knows whether the person using the server is the real owner. It was built only for the original users of the mobile.

But still, it was working, and you could actually regain access to your activation-locked device using the server.

Everything went well for DoulCi, until Apple noticed the vulnerabilities.

Once Apple got to know about the two vulnerabilities in its activation lock that was allowing the DoulCi team to bypass the lock, it patched those vulnerabilities.

After patching, DoulCi had no other way to bypass the lock, and the company was suspended in 2014. Moreover, the server was only for the iOS 7.1.1 or lower.

Since doulCi was the first team to bypass the lock successfully, after its suspension, scammers have used the name of the company and the owners to cheat people. Now, there are other downloadable software/tools and online servers by the name of doulCi, but most of them are scams, while others are using illegal methods to bypass the iCloud Activation lock.

Now that we have some information about the company DoulCi, let’s see this DoulCi Activator.

DoulCi Activator is a downloadable server that claims to bypass the activation lock. As the real DoulCi Teamwas suspended in 2014, we have every reason to believe that DoulC iActivator is actually a scam.

Although DoulCi is already suspended, the website is still running, and the team has made it very clear on the official website Doulci.com that everyone on the internet who claims to be the “DoulCi Team” is scammer.

“The word 'doulCi' has been stolen by scammers and thief’s, and everyone now on the internet claims that he is part of what was so called 'DoulCi Team', they are all scammers”

Therefore, if you are trying to use the so called DoulCi Activator, or even further, you are about to pay for the service, you really need to think twice. At the very least, they are not the legitimate “DoulCi Team” that they claim to be.

So since the very name of the product is stolen, DoulCi Activation is apparently not reliable. But that doesn’t mean you cannot bypass the activation lock on your iPhone or iPad (or iPod Touch). There are still some decent tools like iBypasser or WooTechy iSalvor that can actually bypass activation lock for you.

Today I want to show you something about WooTechy iSalvor, the activation lock bypass tool available on both Windows and Mac with a free trial version that can allow you to test the usability of the program.

Unlike other activation lock which are based on online servers, iSalvor works on jailbreak which is more solid and trustworthy, and you can restore your phone to its normal status anytime you want. The best part about iSalvor is that you don’t need to wait for too long. You can download the software and start unlocking your phone immediately.

On Mac, iSalvor integrates the jailbreaking process in the program so it's super easy, and it will hardly take a few minutes to finish the whole process. On Windows, you need to jailbreak the device on your own, but it’s simple, and iSalvor provides a detailed jailbreaking tutorial to guide you through the Windows jailbreaking process.

Now let’s have a closer look at iSalvor and see how it works for bypassing the activation lock.

iSalvor is a simple tool that is very easy to use. You can unlock your device on your own, and it needs only several simple steps to unlock the device.

Step 1: Download WooTechy iSalvor and install it on your computer. Because iSalvor would keep updating to improve the software performance, make sure you download from the official iSalvor product page or directly with the links below.

Step 2: Launch iSalvor and click “Start”. Then connect your device with activation lock to your computer. 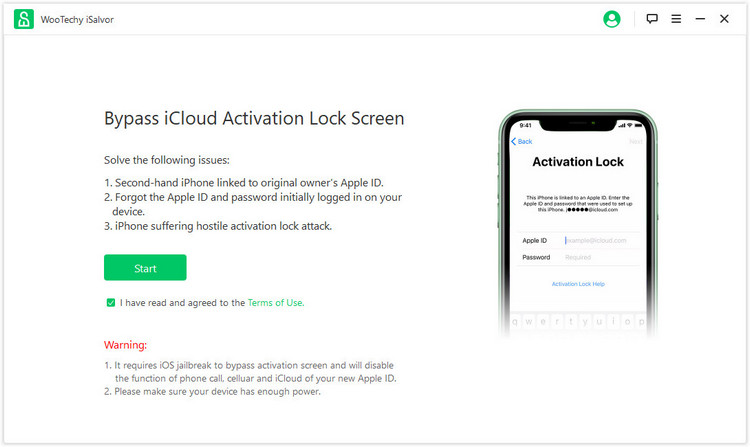 Step 3: Then you need to jailbreak your device. But don't worry, iSalvor will guide you through the entire process. Once it’s completed, verify your device information and click “Start Bypass”

Step 4: Then all you need to do is wait. Usually it only takes you seconds to bypass the activtion lock after jailbreaking. 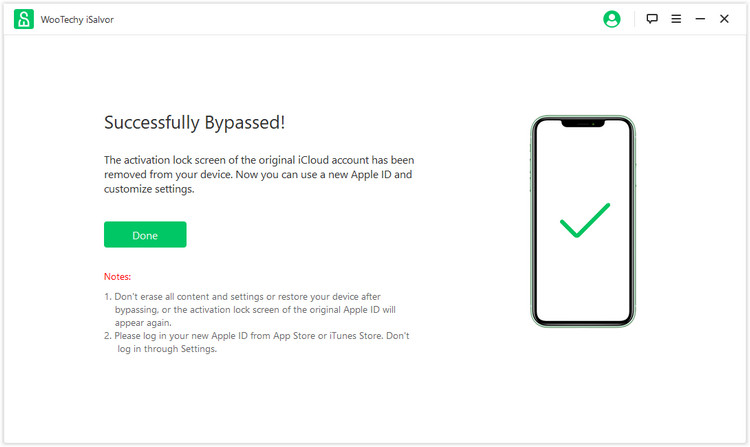 You only need to follow these steps to unlock the device. iSalvor supports most Apple devices on the market, but there are still a small protion of devices are not supported. So make sure you use the free trial version of the product to see whether your device is supported or not.

There are many tools available for activation lock bypassing, but beware of scams. DoulCi was suspended in 2014, and there is nothing new from the official team. So it’s pretty clear that the DoulCi Activator is another one of the activation lock scams which stole the name of DoulCi. If you want to remove activation lock, the best alternative is iSalvor. You can unlock your device quickly and without any hassle using this software. It is affordable and reliable, and you can also check the compatibility for absolutely free. If you have any problem in the activation lock bypassing process with iSalvor, we will always be here to help.